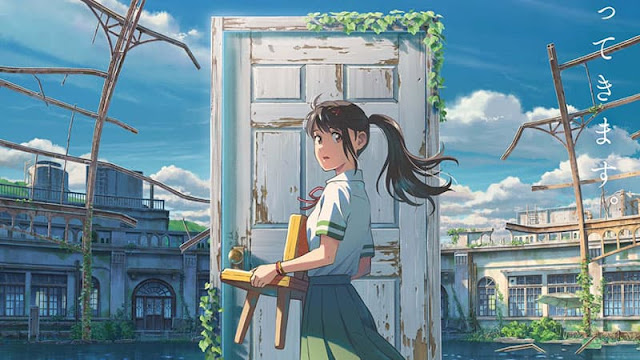 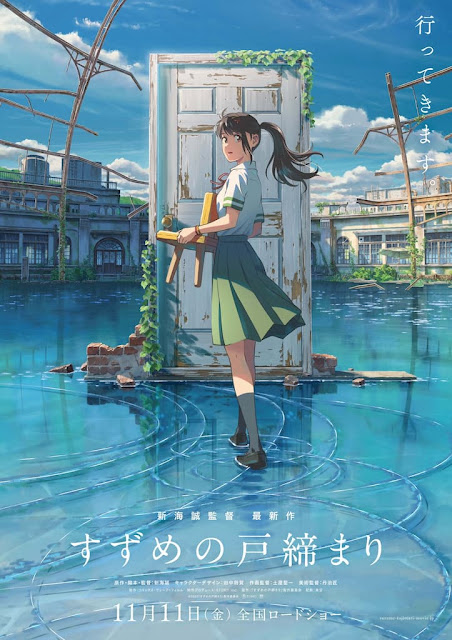 The heroine is depicted in the newly-unveiled poster standing in front of an isolated door, holding a wooden chair, with water beneath her and ruins all around her.
“Suzume no Tojimari” has a literal translation of “Suzume’s Locking-Up.” It follows Suzume, a 17-year-old schoolgirl from the Kyushu region, who meets a young man looking for a strange door. They travel together and find an old door at an abandoned house in the mountains, and Suzume opens it. Suzume’s discovery triggers a chain reaction that opens other mysterious doors across the country, wreaking havoc.
Suzume’s journey across the country to locate and close these doors that are causing disaster is chronicled in the film.

Another announcement tweet features a still image of Suzume walking through an abandoned hot spring town. Also stated in the announcement is the premiere of the anime’s trailer video. A new teaser of Suzume no Tojimari will appear during a premiere event on April 10, 2022, at 8 p.m. Japan Time (7 p.m. Philippine Time). The film premiere event will be streamed live on the official Toho YouTube channel.
This marks Makoto Shinkai’s first film in three years. His most recent feature film, “Weathering With You,” was released in 2019. Meanwhile, he released the popular anime film “Your Name” in 2016.
You might also like: List of Websites to Watch Anime for Free
Suzume no Tojimari, the new movie by Makoto Shinkai, will release in Japanese theaters on November 11, 2022.