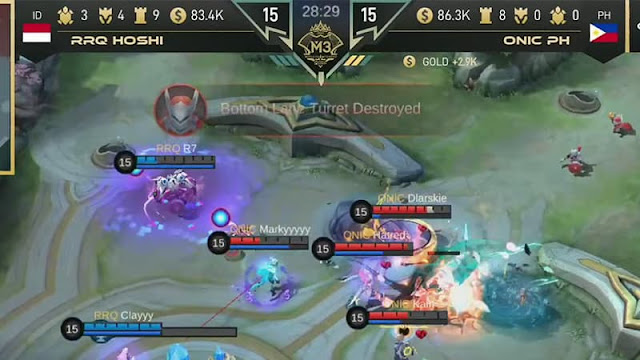 Onic Philippines clinched their spot in the upper bracket finals as they swept Indonesia’s RRQ Hoshi, 3-0, in the Mobile Legends: Bang Bang M3 World Championship on December 15.
This game saw the Filipino squad carrying their momentum from the 3-0 win over Singapore’s RSG SG and topping the group stage.
Onic PH started the series with an aggressive play as they dominated RRQ in Game 1. At the 10-minute mark, the Onic wiped out RRQ in the mid lane, eventually taking a 13-minute victory with a 19-7 kill advantage.
The 22-minute Game 2 was a close fight between the two teams. Onic PH and RRQ Hoshi made equal trades in every team clash. However, the Filipino squad continued their “banana split” strategy or their signature split-push technique and outplayed the Indonesian team to reach the match point 2-0. Onic won the second game despite a 17-10 kill deficit.
Onic PH successfully fended off RRQ’s attempt to make a comeback in Game 3 as they dealt a pivotal three kills in the late minutes, eventually winning the game at the 28th minute with a 15-15 kill score and relegating RRQ to the lower bracket.
Kairi earned the MVP honors for all games with Lancelot, Ling, and Natan.
Onic PH will face the winner of the other upper-bracket semifinals match between North American squad BloodThirstyKings (BTK) and Singaporean team EVOS SG on December 18.
Meanwhile, RRQ Hoshi will fight against Filipino team Blacklist International in the lower bracket quarterfinals on December 17.
Onic PH roster:
Image credit: Screenshot from YouTube/Mobile Legends: Bang Bang Official