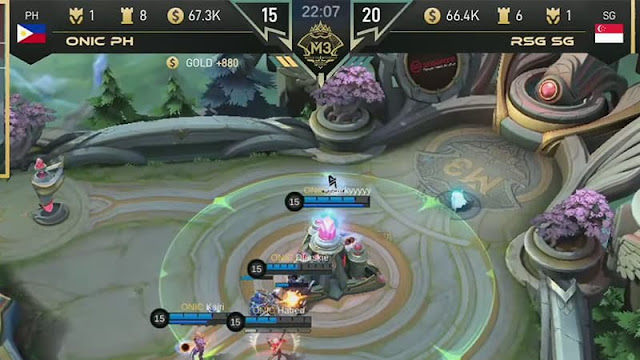 Onic Philippines is moving to M3 World Championship Playoffs’ upper bracket semifinals after sweeping RSG Singapore, 3-0, in the first upper bracket quarterfinal match on December 12.
Before their bout against Singapore’s RSG, Onic PH has topped the group stage. With their victory against RSG SG, Onic PH will advance to the upper bracket. Meanwhile, fellow Filipino squad Blacklist dropped to the lower bracket after losing to North America’s BloodThirstyKings.
Game 1 saw Onic PH flaunting their “banana split” strategy to control the map, managing to destroy all RSG inhibitor turrets at the 12-minute mark. With Luminous Lord in their possession, Onic PH powerfully marched to the base to end the match with a 9-8 kill score in under 16 minutes, leading the series 1-0.
Though Game 2 is a neck-and-neck match, the Filipino team showed their domination against the RSG SG crew at the 10th minute with a wipeout. Again, with Luminous Lord on their side, Onic PH was able to take down four of RSG in the final clash, tallying a kill score of 15-10 to reach match point 2-0.
Despite RSG’s solid performance at the start of Game 3, Onic PH made a comeback with one successful team clash at the 21-minute mark where Kairi’s Natan scored a maniac that eventually led to wipeout. RSG destroyed RSG’s base in the 12th minute, securing a 3-0 victory in the best-of-five series.
Onic PH will face the winner of the quarterfinals match between Todak and RRQ Hoshi.
ONIC PH roster
Image credit: Screenshot from YouTube/Mobile Legends: Bang Bang Official