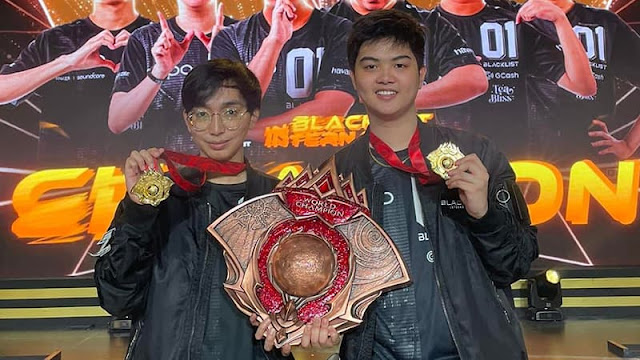 The formidable duo of Blacklist International, OhMyV33nus and Wise, will be skipping Mobile Legends Professional League (MPL) Philippines Season 9, as announced by their team.
In a Facebook post, Blacklist International said that OhMyV33nus and Wise’s decision to miss the upcoming season of MPL PH was “mutually agreed,” who were both instrumental in the back-to-back MPL PH championships — Season 7 and Season 8.
The all-Filipino squad shared that “this is the perfect time” for the V33Wise duo to take a “much-needed break,” which will “better equip them” for another campaign in Season 10 and the opportunity to “defend their world championship title.”
Blacklist added the two players will stay under Tier One Entertainment, and “they are excited to use this break to pursue personal goals and spend more quality time with their families.”
With OhMyV33nus and Wise as its core, Blacklist showcased its prowess on the international scene by winning the recent Mobile Legends M3 World Championships, earning the squad a USD 300,000 grand prize (around PHP 15 million).
Additionally, OhMyV33nus and Wise had runner-up finishes in the Mobile Legends Southeast Asia Cup 2021 and Mobile Legends Professional League Invitational during their time with Blacklist.
MPL PH Season 9 will start on February 18, featuring the same teams from Season 8, including Blacklist International, Bren Esports, Echo, Onic PH, Omega Esports, TNC Pro Team, Nexplay EVOS, and RSG PH.
Image via Ohmyv33nus