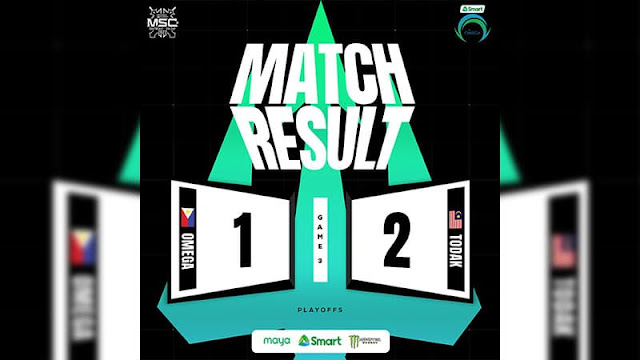 Omega Esports dropped to the lower bracket of Mobile Legends: Bang Bang Southeast Asia Cup (MSC) 2022 after losing to Malaysia’s Todak, 1-2, in the quarterfinals on June 14 (Tuesday).
Due to Todak’s well-calculated counterplays, the “Comeback Kings” were unable to achieve their usual late-game dominance.
In Game 1 of the best-of-three series, Omega Esports had the early advantage after securing crucial objectives and destroying the majority of Todak’s base defenses. At the 20-minute mark, the MSC 2021 champs overstayed in Todak’s territory due to a mistake. This resulted in a wipeout that severely hampered Omega Esports’ ability to win the first game.
In Game 2, Omega rebounded by capitalizing on an overextension by the more favored Todak.
In Game 3, however, Todak defeated Omega, maintaining their momentum to secure a spot in the upper bracket semifinals.
With the result, Smart Communications-backed Omega Esports is one loss away from getting eliminated from the regional tournament.
Omega will be facing Evos SG in the lower round 1 match on June 16, Thursday.
Meanwhile, Todak shall now join RSG PH in the upper bracket playoffs. They will be up against Indonesia’s RRQ Hoshi in the upper bracket semifinals match on June 15.
Omega Esports MLBB roster
Image via Smart Omega ML