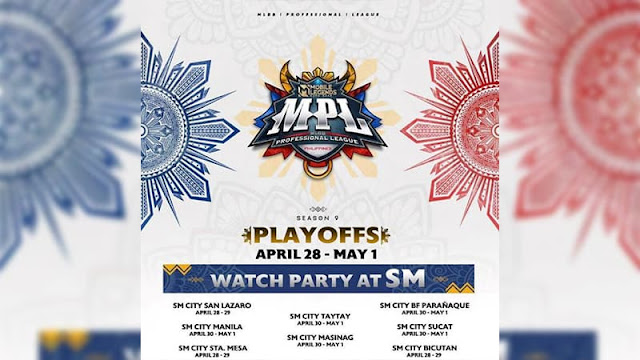 Moonton Games has announced it will be hosting a watch party for the upcoming MLBB Professional League Philippines Season 9 (MPL PH Season 9) playoffs from April 28 to May 1, 2022, on select SM Cinemas.
Here’s the official schedule for each of the selected SM Cinemas: Tickets are priced at PHP 170 (USD 3) and include a free basket of popcorn as well as Mobile Legends: Bang Bang freebies.
You can buy tickets at the SM Cinema ticket booth of participating SM Supermalls branches.
Tickets are also available online through the official website of SM Cinema (www.smcinema.com), the SM Cinema App, or via this direct link (https://bit.ly/MPLAtSMCinema).
According to the MPL Philippines Facebook page, the league will be giving away eight free tickets to fans who comment on the post explaining why they deserve the free ticket.
MPL PH Season 9 Playoffs Teams
Here are the teams qualified for the playoffs stage of MPL PH Season 9.
Here’s the MPL PH S9 Playoff Bracket: What can you say about MPL PH Season 9 Playoffs Watch Party? You can leave your comment below.