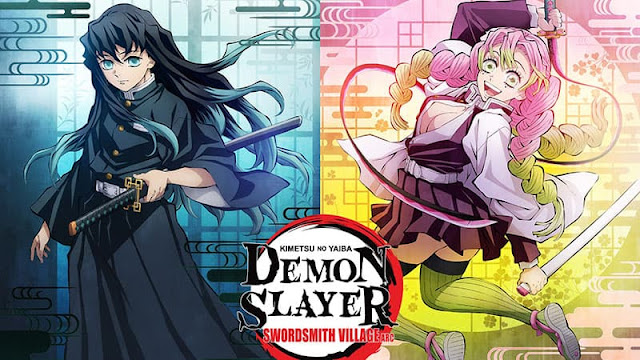 “Demon Slayer: Kimetsu no Yaiba” Season 3 is in the works, as announced by the social media handles of the popular anime series.
According to the announcement, the third season of Demon Slayer will adapt the Swordsmith Village Arc.
The video teaser introduces two new major characters: Muichiro Tokito (the Mist Hashira) and Mitsuri Kanroji (the Love Hashira).
The Swordsmith Village Arc arc follows Tanjiro’s adventures in Swordsmith village, which Upper-Rank Five, Gyokko, and Upper-Rank Four, Hantengu, are scheming to destroy. Tanjiro travels to the town in search of a new sword and, to his surprise, comes across a 300-year-old sword.
Then, Tanjiro, Nezuko (Tanjiro’s sister), Genya Shinazugawa (a fellow Demon Slayer Corps. member), and Mitsuri Kanroji join forces to save the village’s inhabitants. Moreover, Muichiro Tokito will also play a crucial role in conquering the Upper-Rank Five.
The announcement of Demon Slayer Season 3 was released following the conclusion of the second part of Season 2, which focused on the Entertainment District Arc. Mugen Train Arc, the first part, premiered last October.
“Demon Slayer: Kimetsu no Yaiba,” based on the manga by Koyoharu Gotoge, follows Tanjiro Kamado, a young lad who embarks on a mission to become a demon slayer after his family is slain and his younger sister Nezuko is transformed into a demon.
You might also like: List of Free Anime Websites to Watch Anime Legally
Demon Slayer: Kimetsu no Yaiba is available for streaming in the Philippines for free via Bilibili and Viu. Users can also watch some free episodes on iQiyi.
Image via Facebook/Demon Slayer