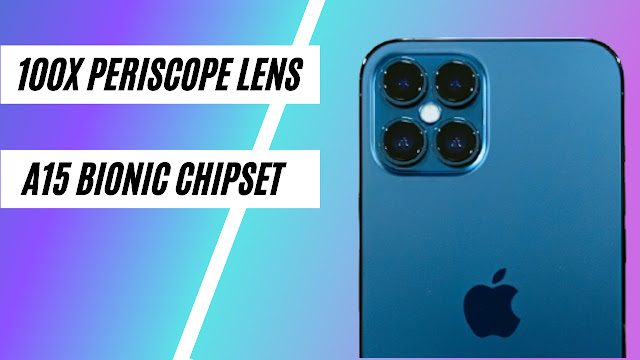 Apple iPhone 13 is a product of Apple. Apple will launch it now after iPhone 12. iPhone 13 is the most awaited iPhone of the year, and it is bound to happen. This is a completely new iPhone, and it is expected to be a major Apple product announcement. Many people are eagerly waiting for its arrival.

So guys the first news of the day is about the 100x that awesome periscope lens that made the iPhone 12 and a half bigger. For Apple discovered a pattern. This new zoom lens has been approved to show up. But to be 100% clear it won’t come to the iPhone 13. And if anything is to be believed for next year.

iPhone Next we have news on the A15 Bionic chipset powering the iPhone 13. WCCF Tech has correctly pointed out. That the a15 is going to have the same CPU configuration as the predecessor.

This is good but there is definitely going to be an improvement in power and efficiency that many had expected. The four-nanometer chipset will not be the case. But the chipset will be built on TSMC’s n5p node. If I can say it in easy language.

So this is an improved version of the five-nanometer process. That was also used in last year’s a14 a15 is still going to be faster, more efficient than last year’s chip. And as always it is the best performing mobile on-chip. The system can be there. And I will tell you one more thing about Apple.

Also, see this: The Apple iPhone 13: Leaks/Specs & Price in India. Which You Must Know

Apple is increasing production of the iPhone 13 to 90 million units. Which surpasses the production of the previous iPhone. 75 million which means they are making 20 more iPhone 13s. And this is the report from Bloomberg in anticipation of better sales.

And it also confirmed many details we already knew. And the iPhone 14 won’t have an in-display fingerprint scanner and won’t actually have Touch ID. I felt bad about this. And maybe you find it a little disappointing too. But guys apple compliments their faces.

So much that it seems they don’t want to go back it confirms even a small notch. And for those of you Still removed from the notch. As Bloomberg reports, Apple is working to remove it, but even on next year’s iPhones, they’re still going to tie the knot.

We’ve got the entire iPhone 13 series models that appeared on Weibo. Granted, while they are just examples of size and don’t look great they do give us a good idea of ​​what we can expect from the entire range.

And they look very close to the final product. It not only tells us what size. They are going to be as well as compared to the predecessor. It also shows us how the phone is going to look the only thing. Rumors will say about it though that the notch is still wrong.

Also, see this: Apple’s latest announcement: & products. Everything You Need To Know

The last iPhone 13 has a thinner notch which looks a lot better than it, especially when it comes to quieter speakers. Which is best. But overall the iPhone 13 is going to be one-of-a-kind. Incredible device and that’s why Apple is expecting more sales this year.

And it has everything I want for those of you with the exception of the in-display fingerprint scanner. So Who is excited about the Apple iPhone 13?. So it’s great that we’ve got so much information about the iPhone 13 series.

So iPhone 13 series launch in September. (After 10th September). That it’s not too long until it’s officially revealed by apple, thankfully there’s plenty for iPhones. Stock is expected and Apple is reportedly not going to be affected by the chip shortage now causing problems for many other companies.

So these are the Apple latest iPhone 13 news: 100x periscope lens, A15 Bionic chipset, And More

So that’s all for today. Hope you understand this. In this article, we talked about the Apple latest iPhone 13 news: 100x periscope lens, A15 Bionic chipset, And More. If you liked this article.

So, please share with your friend. If you have not understood. So you can tell me through the comments. Thank you.